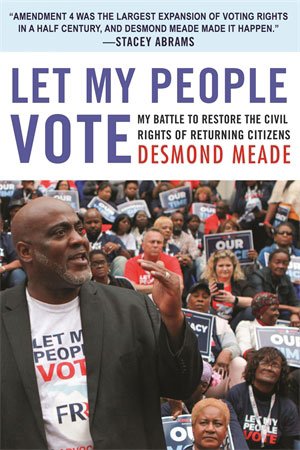 My Battle to Restore the Rights of Returning Citizens

““You may think the right to vote is a small matter, and if you do, I would bet you have never had it taken away from you.” Thus begins the story of Desmond Meade and his inspiring journey to restore voting rights to roughly 1.4 million returning citizens in Florida—resulting in a stunning victory in 2018 that enfranchised the most people at once in any single initiative since women’s suffrage.

Let My People Vote is the deeply moving, personal story of Meade’s life, his political activism, and the movement he spearheaded to restore voting rights to returning citizens who had served their terms. Meade survived a tough childhood only to find himself with a felony conviction. Finding the strength to pull his life together, he graduated summa cum laude from college, graduated from law school, and married. But because of his conviction, he was not even allowed to sit for the bar exam in Florida. And when his wife ran for state office, he was filled with pride—but not permitted to vote for her.

Meade takes us on a journey from his time in homeless shelters, to the exhilarating, joyful night in November of 2018, when Amendment 4 passed with 65 percent of the vote. Meade’s story, and his commitment to a fully enfranchised nation, will prove to readers that one person really can make a difference." 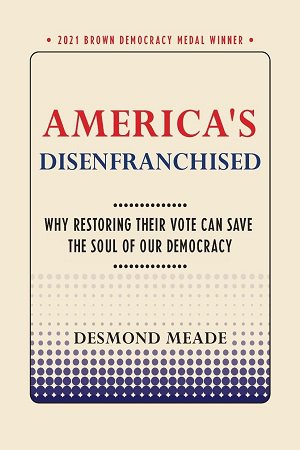 Why Restoring Their Vote Can Save the Soul of Our Democracy

" The Lawrence and Lynne Brown Democracy Medal, presented by the McCourtney Institute for Democracy at Penn State, recognizes outstanding individuals, groups, and organizations that produce innovations to further democracy in the United States or around the world.

Voting is foundational in a democracy, yet over six million American citizens remain stripped of their ability to participate in elections. Once convicted of a felony, people who complete their sentences reenter society, but no longer with the civil rights they once had. They may return to school, secure employment to provide for their families, and become law-abiding, tax-paying citizens—sometimes for decades—and still be denied the voting rights afforded to every other citizen.

Desmond Meade, director of the Florida Rights Restoration Coalition and a returning citizen himself, played an instrumental role in the landslide 2018 Amendment 4 victory in Florida, which used the ballot box to restore voting rights to 1.4 million Floridians with a previous felony conviction. Meade argues how, state by state, America can do better. His efforts in Florida present a compelling argument that creating access to democracy for those living on the fringes of society will create a more vibrant and robust democracy for all. He is the winner of the 2021 Brown Democracy Medal for his continuing work to restore voting rights and connect Americans along shared social values."