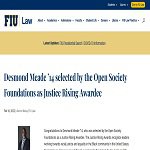 "Congratulations to Desmond Meade ’14, who was selected by the Open Society Foundations as a Justice Rising Awardee. The Justice Rising Awards recognize leaders working towards racial justice and equality in the Black community in the United States. Desmond was chosen as one of the 16 awardees for the impact he has made and the tireless commitment to ending the disenfranchisement of and discrimination against people with convictions." Read more... 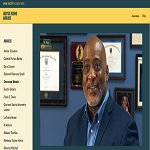 "Desmond Meade is the president of the Florida Rights Restoration Coalition (FRRC), chair of Floridians for a Fair Democracy, a MacArthur Fellow, and a graduate of Florida International University College of Law. The FRRC is recognized for its work on voting and criminal justice reform issues. A formerly homeless returning citizen, Meade has overcome many obstacles to eventually become the FRRC’s president and executive director. He led the FRCC to a historic victory in 2018 with the successful passage of Amendment 4, ..." Read more... 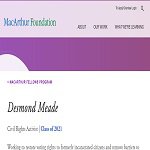 "Desmond Meade is a civil rights activist working to change disenfranchisement laws and other barriers preventing formerly incarcerated citizens from fully participating in civic life. Formerly incarcerated people face restrictions in housing, education, and financial assistance, and in some states their access to basic democratic liberties such as the right to vote, hold public office, and obtain professional licenses is also curtailed. As executive director of the Florida Rights Restoration Coalition (FRRC) and a returning citizen himself, Meade understands firsthand the stigma people with prior convictions face and ..." Read more... 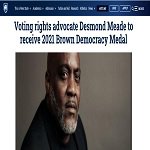 "UNIVERSITY PARK, Pa. — For Desmond Meade, the right to vote is not simply a bedrock of American democracy. It is a personal struggle. He knows what it’s like to lose that right and he has spent the past 15 years working to help formerly incarcerated people in Florida fight to regain it.

Meade, the executive director of the Florida Rights Restoration Coalition (FRRC), will be honored for his work as a democracy advocate with the McCourtney Institute for ..." Read more... 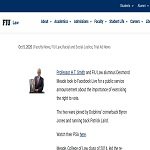 "Professor H.T. Smith and FIU Law alumnus Desmond Meade took to Facebook Live for a public service announcement about the importance of exercising the right to vote.The two were joined by Dolphins’ cornerback Byron Jones and running back Patrick Laird. 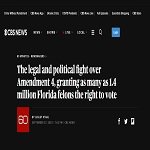 The legal and political fight over Amendment 4, granting as many as 1.4 million Florida felons the right to vote

" President Trump campaigned this past week in Florida, a crucial swing state he won by a narrow margin in 2016. Then, two years later, Florida voters in a brief bipartisan moment, approved an amendment to the state's constitution that restored voting rights to as many as 1.4 million residents who'd been barred from voting because they had a prior felony conviction. Amendment 4 had only two conditions: those convicted of murder or felony sexual assault did not qualify; and felons first had to complete, "all terms of sentence including parole or probation." It was the single largest addition to the country's voting population in half a century. But then things got complicated. ..." Read more...