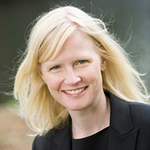 Professor Caroline Davidson, of Willamette College of Law, presented a working draft of her work Nunca Mas Meets #NiUnaMenos— The Prosecution of Dictatorship-era Sexual Violence in Chile. This work seeks to explore reasons for delay in justice for sexual violence in Chile and what international criminal justice can learn from the Chilean example. If accountability for sexual and gender violence is a priority, and the ICC regime is premised on decentralized enforcement by national judicial systems, then a greater attention to obstacles to domestic justice for sexual and gender violence and ways of encouraging domestic prosecution is needed.

Davidson joined the Willamette law faculty in the fall of 2008. Before joining Willamette, she worked on prosecutions of people accused of atrocity crimes at the International Criminal Tribunal for the former Yugoslavia and the State Court of Bosnia and Herzegovina. She also has worked in criminal defense as an assistant federal public defender in Portland, Oregon, and civil litigation as an associate at Howard, Rice, Nemerovski, Canady, Falk & Rabkin in San Francisco.”